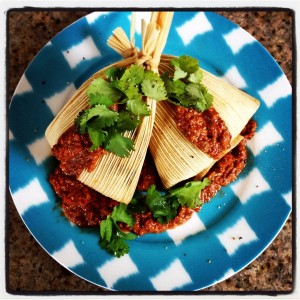 Starting my own business has been quite the experience.  I’ve learned so much in the last 6 months, and taken so many big steps toward making my dream a reality.  Returning to New York after 2 months spent in Southeast Asia, I knew suddenly how crucial it was for my life’s journey to share my passion for delicious and healing foods with people who are searching for just that.  With that realization the idea for The Nourishing Vegan was born.
I would never have dreamt that I would one day have aspirations to become a personal chef or holistic health coach!  Ten years ago I could not have cared less about cooking.  Back then my goal was to become a movie star.  Yet somehow I rediscovered the passion that I hidden for so long; my love of food. 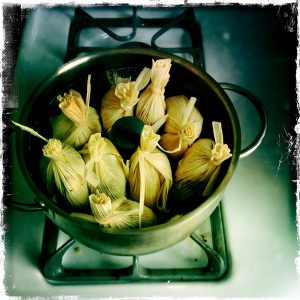 Perhaps this post about the birth of a vegan foodie, and the creation of this blog and business should be saved for later in the week when Sweet Potato Soul turns 2 and I hit the big 25.
Either way, this will be a week of reflection; of letting go of old clutter (in my mind and apartment) and making space for new joys and adventures.

Working on this business hasn’t been easy.  Still, in the moments when I reflect on the greatness that has come and the promise that is ahead I vibrate with hope. My education at the Institute for Integrative Nutrition and my new internship with personal chef Danielle, have been invaluable for my growth.

As Booker T. Washington said, “Nothing ever comes to one, that is worth having, except as a result of hard work.” 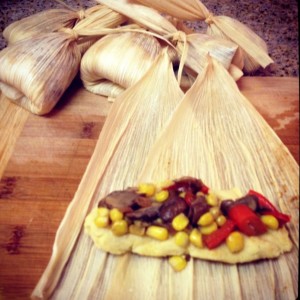 I feel that way about these tamales too.  Like my business, they started out as a delicious dream.  I learned the methods and watched them being made (at Peacefood Cafe & Pure Food and Wine); then I attempted them on my own.  At first, they seemed easy; the corn husks cooperating and folding together beautifully.  Yet halfway through, difficulties presented themselves–torn husks called for ingenuity- and it seemed as though these tamales would never get done.  Then once they were all packed into the steam basket, the waiting began.  Patience is a virtue when waiting 60-90 minutes for tamales to cook. When at last the packets are steamed and ready, enjoying their goodness is a gift, even when enjoyed with critical tongue.
That’s the way it goes.  We work hard doing what we love to reap the benefits and gain experience, and we become more skilled daily.  It’s an incredibly rewarding process! Who knew tamales could be likened to starting a business?

One of these days I suggest you put aside a few hours to make tamales.  Experiment with different fillings and sauces for an exciting and impressive treat.  Hey, the Superbowl is Sunday.  How about a Superbowl tamale making party?
Enjoy : ) 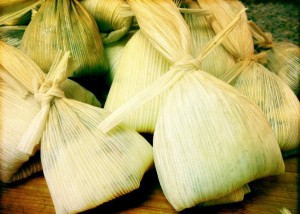 Tamales with Molé
(Masa Harina is a traditional Mexican cornmeal. Unlike the cornmeal most Americans are familiar with, Masa Harina is made with corn (hominy) that has been treated with lime and water then dried and ground into a fine flour.  Look for Masa Harina at your normal grocery store.  I used the Bob’s Redmill masa, but the brand Maseca is the main commercial brand that you’ll find.  Next time I’d like to try them with a mix of masa harina and cornmeal; as the two have distinctly different flavors.  Look for corn husks in the “Latin” section of your grocery store, or visit an ethnic grocer.  The molé is far from traditional, but tasty anyway. You’ll find the recipe for the molé below the tamale instructions.)
1 package of dried corn husks, soaked in warm water while preparing the other ingredients.  Tear one    whole corn husk lengthwise into 1/2 inch strips, to be used to tie the tamales.
masa dough:
2 cups Masa Harina
2 cups water
2 tsp coconut or olive oil
2 tsp sea salt
handful of chopped cilantro, chopped
In a sauce pan, bring 2 cups of water, oil and salt to a boil.  Turn off heat and slowly stir in the masa harina and cilantro.  You will have a thick dry dough.  Allow to cool.
filling:
3 cups mushrooms, baby bella, sliced
1 cup corn kernels
1 red bell pepper, diced
1/2 onion, diced
1 clove garlic, minced
1 handful cilantro, chopped
1 tsp sea salt
1/2 tsp cayenne pepper
1 tsp cumin
1 tsp black pepper
In a large pan heat 2 tbsp coconut or olive oil on medium heat.  Add onions and garlic; saute until translucent. Add red bell pepper, mushrooms, corn, cilantro and spices; cook until the vegetables have softened.
assemble the tamales:
Assuming that the masa has cooled off, scoop about 1/3 cup out and roll into a ball.  Do this with the remaining masa.  You will have about 14 balls.
Remove one large corn husk from its soaking bowl and place on a clean work surface.  Near the bottom center of the husk place one masa ball and flatten with your palm.  In the center, place a couple of tablespoons of the filling. Fold the bottom end of the husk up and over the filling, now fold the right side over, then the left, creating a little packet.  Fold as tightly as possible, and tie the top of the tamale with a strip of corn husk.  Do this with the remaining masa and filling.  If the husk rips, or is too small to fold, use two husks, one overlapping the other to create a larger base.
Once the tamales are assembled, prepare a steam basket.  Make sure to use enough water, as these will steam for a minimum of one hour.  Place tamales in basket, as many as will fit snug, and cover to steam for an hour.  To test if tamales are done, they should be slightly firm to the touch.  I find that 60 minutes is a good amount of time to cook, though a few minutes more or less is probably fine.
While the tamales are steaming make the molé!
molé:
1/2 onion, diced
1 clove garlic, minced
1 red bell pepper, diced
1/4 cup pecans
2 tbsp cocoa powder
1 tsp sea salt
1/2 tsp cayenne pepper
1/2 tsp cumin
1/2 tsp cinnamon
1/2 tsp black pepper
1/4 cup water
In a small pot heat 1 tablespoon of coconut or olive oil on medium heat.  Add onions, red bell pepper and garlic; cook until the onions are translucent. Add pecans, and stir to coat and lightly toast.  Stir in spices, then cocoa powder and water.  Bring to a simmer, then remove from heat.  Allow to cool, then add the mixture to a food processor.  Blend until it becomes a thick sauce.
To serve, cut open the tamale and spoon a generous amount of molé on top.  Garnish with chopped cilantro.  Buen provecho!