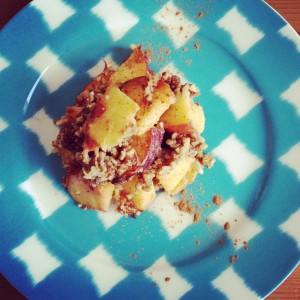 Barbecues and family cookouts, humid air and oversized sunglasses, shaved ice on the corner or 139th and Lenox and juicy ripe fruit. In some parts of the country summer produces the most sinful desserts made with some of the abundant succulent fruit; namely the peach cobbler. Butter, sugar, white flour… more butter and way more sugar, and peaches straight from the can. How ironic.

No judgement. It’s just that I can’t eat that way. I feel guilty, bloated, a little nauseous and unsatisfied. Food should never cause that reaction. Still, sometimes I want something more exciting than an unadulterated peach for dessert. Despite how unhealthy a traditional peach cobbler is, I appreciate the love and attention that goes in to making that special dessert. I love how each cook puts their own mark on the sugary concoction; a dash of nutmeg, fresh peaches instead of canned. How sweet 🙂

Still, sugar is a bitch. We all know it. And so is white flour and yes, even butter! Those poor peaches want to be the star. They don’t want to be pasteurized and canned with sugar syrup just to be covered in more white stuff. They want their natural sweetness to shine. They’re screaming to have their vitamins and minerals appreciated; and they don’t care to have their skin peeled off and thrown away. Peaches want to make you feel great, so that you can enjoy many more summers with the ones you love in good health.

So I created a raw peach cobbler to satisfy my own need for peachy goodness, and fancy dessert. Nuts do a great job at mocking decadence, while providing us with much needed healthy fats. Peaches, being naturally juicy and sweet don’t require much to bring out their one of a kind flavor; and, along with pecans — another star of the south– this peach cobbler might easily become your go-to summertime treat.

My friend and talented photographer/health coach, Susan Pittard, posted her own version of the raw peach cobbler on her blog My Beeting Heart (here). It looks so tasty! If I were you, I’d give both recipes a try. And I might eat them both with Coconut Bliss vanilla ice cream : )

Raw Peach Cobbler
4 ripe peaches, sliced 1/4 inch thick
2 tsp maple syrup (optional, if  your peaches aren’t as sweet as  you’d like)
2 tbsp fresh squeezed orange juice
vanilla bean
1 1/2 cup pecans
1/2 cup Medjool dates, pitted and chopped
dash of cinnamon
pinch of sea salt
In a large bowl add maple syrup, orange juice and the seeds from half of the vanilla bean to the sliced peaches. Toss well to coat.
In food processor, pulse pecans, dates, the seeds from the other half of the vanilla bean, cinnamon and salt until a hearty nut crumble is left. Add this crumble to the sliced peaches, toss lightly, then spoon into a pie dish to serve.

I know you’ve all made my cauliflower crust pizz

Baby wearing is my jam! And honestly, it makes me

#ritualpartner Coming up on the 10th anniversary o

Happy #veganuary 🥳 Have you noticed that everyo

Don’t be like me and nearly forget to make colla