Hello Morning, and thank you for waking me with a  powerful craving for pancakes! 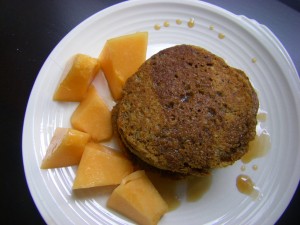 This morning I threw together some incredibly delicious AND nutritious pancakes.  I just knew Spelt Flour with Oat Bran would be a good idea.  I used Flax Seed instead of egg, which allowed me to make a half serving, without having to use half of an egg (oh, and I don’t have eggs at home anyway).  The butter was browned, and the milk was Almond. This was a perfect breakfast for one young woman with a long day ahead of her.  I’m shooting a short film, in which I play a woman seeking revenge against a cheating boyfriend.  Sounds fun! 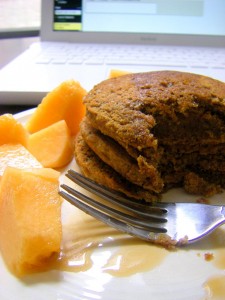 Hearty Oat Bran Spelt Pancakes
(for one, double all ingredients for two. )
1/4 cup Spelt Flour
1/4 cup Oat Bran
1/2 tsp Baking Powder
1/4 tsp Baking Soda
dash of Sea Salt
1/4 tsp Cinnamon
1/2 tbsp Flax Seed (+ )
1 tbsp Raw Cane Sugar or Brown Sugar
1 tbsp vegan butter or canola oil
1/2 cup Almond Milk
Maple Syrup
Begin by browning 1 tbsp of Butter in a small sauce pan on low-medium heat.  Once browned, add the cinnamon, remove from heat and stir to incorporate with butter.  Set aside for later.
In a small mixing bowl combine Flour, Oat Bran, Baking Powder & Soda, and Sea Salt.
In another bowl, make flax seed egg replacement by adding 1 1/2 tbsp Hot Water to 1/2 tbsp Flax.  Stir and allow to thicken a bit.  Add browned butter, sugar, then milk.  If you decide to use Raw Cane Sugar, before adding the Almond Milk, make sure to stir and dissolve the granules as much as possible.
Add wet mixture to dry and mix gently.  Be careful not to overmix.  Set aside for a few minutes while you take the time to heat a pan.
Cook pancakes on low heat over a little melted butter, on low-medium heat.
Have a beautiful morning!

New moms: What are the most important things you k

How to savor breakfast: 1. Put down your phone, 2.

The best thing that’s ever happened to me...even

#ad I made the meatiest #MeatlessMonday meals (mmm

Hold up! How is it possible that Baby J will be ON

Fun fact: I never ate nachos until I became vegan