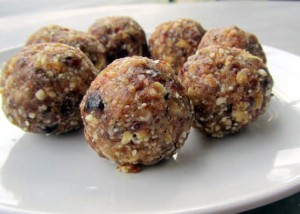 Koh Samui, Thailand was gorgeous.  The food was great, the company even better, and the weather was lovely almost every day of my stay.  I could have stayed longer, but Bali called.

This six, or is it seven, week vacation isn’t necessarily going by quickly, but there’s so much to see and do, I can only spend a week an a half per place. I’m certainly not complaining.  Lounging on the bed in my cheap Balinese bungalow in Ubud, I feel like the luckiest girl in the world.

Want to know about Bali?

Firstly the views from the flight into the island are breathtaking.  You cannot miss the peaks of volcanoes poking through the clouds every where you look.  Flying over a volcano I was able to see inside; water, dazzling aqua blue lay calm within the crater.  I dare not look away to snap a photo.

We landed as the sun made it’s way beyond the horizon and night fell. 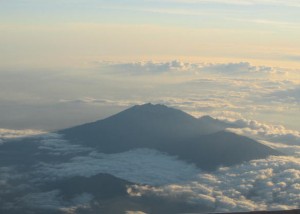 Smoking is not banned indoors here.  I don’t think you can smoke just anywhere, I doubt if someone could light up in a clothing store for example; but around the airport it seemed like every Balinese man had a clove cigarette in his mouth.  I felt dizzy and nauseas waiting in line to buy my return ticket from Bali to Bangkok, and accepted that I would have to get used to the overwhelming smell of smoke.   My smoking taxi driver put out his cigarette, drove me to Ubud, for a hefty price, and I walked around the town a little until retiring to bed.

Ubud is the artistic and cultural (at least for westerners) center in Bali.  As I’ve come to see it over the last couple of days, Bali as a whole is an artistic mecca.  The island is rich in culture, and spirituality is a part of the Balinese daily life.
I am lucky to be here during one of the most important religious ceremonies in Bali, Galungan, which took place yesterday.  Galungan marks start of a 10 day celebration that takes place every 210 days.  From what I understand, during this time the ancestors visit their former homes, and the Balinese give offerings, entertainment and dress to the nines to appease them.  The day before Galungan, I could barely walk down sidewalks as residents of each household worked outside building their penjor, a long curved pole made from bamboo and decorated with coconut leaves and other things like corn husks and rice cakes. Penjors line the streets of Bali, a gorgeous display of creativity.  According to an article I found,  “The arched top of the bamboo pole represents Mount Agung, the body of the pole is a river that flows from the mountains to the sea, and along its route are the products of the harvest, tied to the pole.”

Witnessing this day long celebration made it clear that artistic self and cultural expression play an important part in the Balinese life.  You should have seen the way they were dressed.  Men and women, young and old were adorned in their best sarongs and blouses.  Men covered their heads with a destar and many wore Ray-ban sunglasses as they carried friends or family on the back of their motorbikes.
Temples everywhere, the scent of incense covering the whole island, decorative offerings, brightly colored sarongs, penjors lining the streets, against the back drop of Bali’s rice paddies and bountiful greenery became the ultimate display of living art.

The food in Bali is also very good.  I’m staying in a touristy town, so many restaurants offer food to suit western tastes, but traditional Indonesian and Balinese food can also be found.  Being a vegetarian is incredibly easy.  Tempeh comes from Indonesia, and though it’s considered the “poor man’s food”, restaurants serve it up in delicious preparations.  Tofu , another poor man’s food, can also be found on any menu.  More important than the soy products that provide the meal’s protein, the spice combinations are key to delicious Indonesian cooking.  Spicy sambals, curries, coconut milk, sugar, lemongrass, and galangal all play an important roll in Indonesian and Balinese cooking.  I’ve only been here for 3 days, and haven’t really dove into the islands cuisine as of yet, but as soon as I do you’ll receive a full report.

Until then, I must say that I am excited to sample more of Bali’s culinary offerings and take some cooking classes.
The fruit here is different than in Thailand, though a lot of it is the same.  There’s a tasty fruit called a sawo (or sapodillo) that I really enjoy; it looks like a kiwi, and it’s cinnamony and sweet with a soft texture.  It’s reminiscent of pumpkin pie : )  I want to take boxes of it home with me.
The coconuts here are different.  The water is not sweet, and the meat isn’t tender like my beloved young Thai coconuts.
I hope to find a local produce market to explore.  Unlike Bangkok you won’t find a vendor selling food or fresh fruit at every square foot of town, but this place has it’s own charms I’m sure. 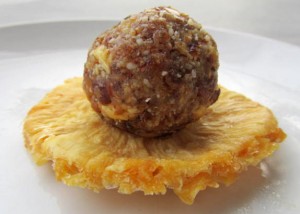 Pineapple Almond Balls
(I created this recipe in Koh Samui for Ta’s Thai Organic Life shop.  The first batch was better than the second, so play around with the ingredients until you find a proportion and consistency that suits your taste.
If possible, find a high quality dried pineapple.  The pineapple we used at Ta’s shop was local from Koh Samui, and the best dried fruit I’ve ever tasted.  The fresh pineapple I ate with Ta, which was from her friend’s mother-in-laws garden happened to be the best pineapple I’ve ever tasted as well.)
makes about 12 balls


In a food processor grind the almonds until they become a fine meal.  Add pineapple, dates and apricots along with cinnamon and salt to the processor and mix until combined well.  Pour in the coconut oil and vanilla and process a few seconds.  Taste mixture and add more fruit, spice or oil if necessary.  The consistency should be a bit chunky and hold together when formed.  Form dough into small or large balls and roll in shredded coconut to coat.  Place onto a plate and into the refrigerator to chill at least 30 minutes.

p.s.  I ate Durian yesterday, and I liked it! 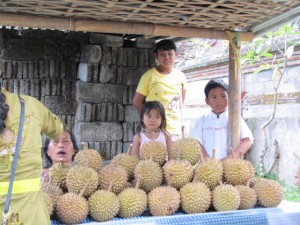 Meal prep is on the menu! Check out my new SUMMER

As a black person in America you feel every act of

Now, whenever you tell Baby J to smile for a photo

No Memorial Day cookouts, no parties at the beach,

#ad My fondest food memories with my mom are of us

I only waited 10 minutes to get into Trader Joe’