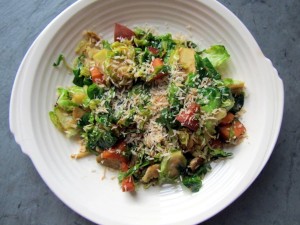 Brussels Sprouts remind me of the colder months.  The image of long stalks being sold at the Copley Square Farmer’s market when I was an undergraduate at Boston University will forever remain one of my fondest memories of fall.

I bought Brussels Sprouts at the market the other day.  While it is officially autumn in New York, the warm weather tricks me into thinking that it is too early for Brussels Sprouts, and that winter squash should not be piled up at my grocery store.  Still, I had a craving for Brussels Sprouts.  That day the weather was warm, I broke a sweat walking home; the heavy grocery bags weighing me down.  The bags were filled with summer’s bounty as well as a little bit of fall’s.  Fresh Brussels Sprouts squeezed between a juicy pineapple and peaches, and a Butternut Squash lay heavily at the bottom of the bag.  Caught between summer and fall,  I don’t want to let go; yet I reach ahead for something new and of the season.

The door to my apartment opened to reveal a stunningly lit living room and kitchen.  The strong light reminded me of Bali.   I opened the cupboard and found shredded coconut, which evoked a memory of freshly toasted coconut being grated by my own hands, and savored between my own lips.  I asked myself, “Is it the time to recreate that fantastic Wild Fern Salad I made with Karen Waddell a couple of months ago?”  The answer, somewhere between a yes and a no, pushed deeper that feeling of not wanting to let go while gazing forward.  This is how stir fried Brussels sprouts ended up on my plate with toasted coconut and roasted sweet potatoes.

Really the only thing Balinese about this dish is the toasted coconut.  If I were to recreate the fern dish, I would fry shallots and make a ginger and garlic paste. However, this Bali inspired simple creation is infused with my memories, and the feeling of not needing much and being grateful for what’s right here in front of me.

In a large wok or skillet, melt coconut oil, and sauté the sliced shallots. When the shallots are translucent, add the Brussels sprouts. Cook on medium heat for about 10 minutes, until they’re tender. Remove from heat, and add the sweet potato, chili flakes, maple syrup and soy sauce. Stir well, and season with more soy sauce to taste. Serve with a generous sprinkling of toasted coconut on top.