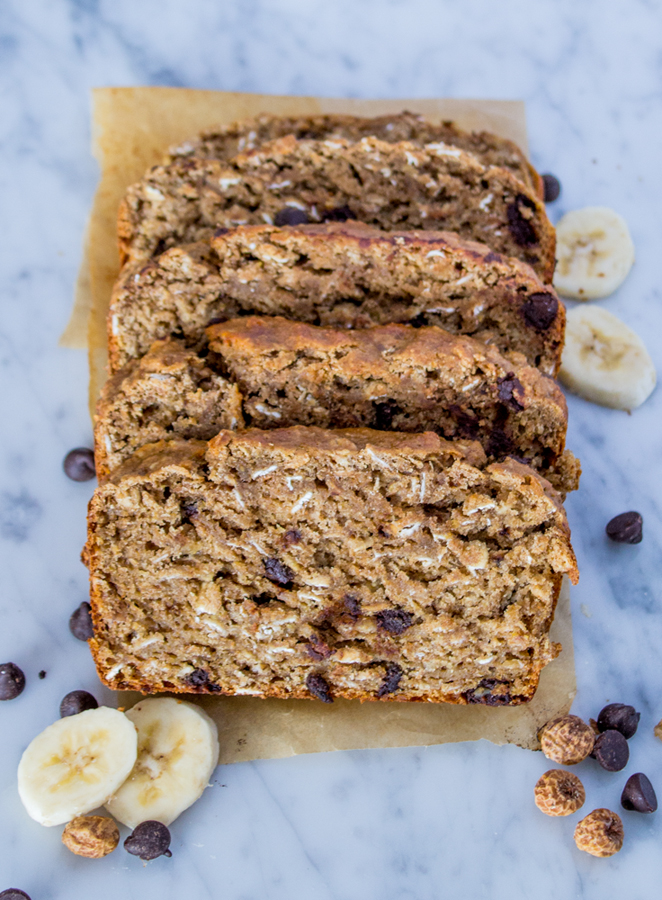 Ladies and gentlemen, may I present to you the tastiest, heartiest, most nourishing, and guilt-free banana bread I have ever baked! This beauty is made with whole grain spelt flour, oats, overripe bananas, and a very special ingredient––tigernuts.

I know what you may be thinking––what in the world is a tigernut?

I have been wanting to share this glorious food with you for months! Way back in summer 2014 one of my clients handed me a bottle of tigernut horchata to try. She promised me I would love it, and right she was. It was a slightly sweet chilled beverage reminiscent of the best creamy almond milk ever. I was even more impressed by this mystery tigernut when she told me it wasn’t actually a nut, but a tiny tuber. A tuber, you know, like a sweet potato!

I sipped and savored that first bottle of tigernut horchata for an hour. Trust me, it was so hard not to gulp it all down in one sitting, but I really wanted to hold on to all that goodness. 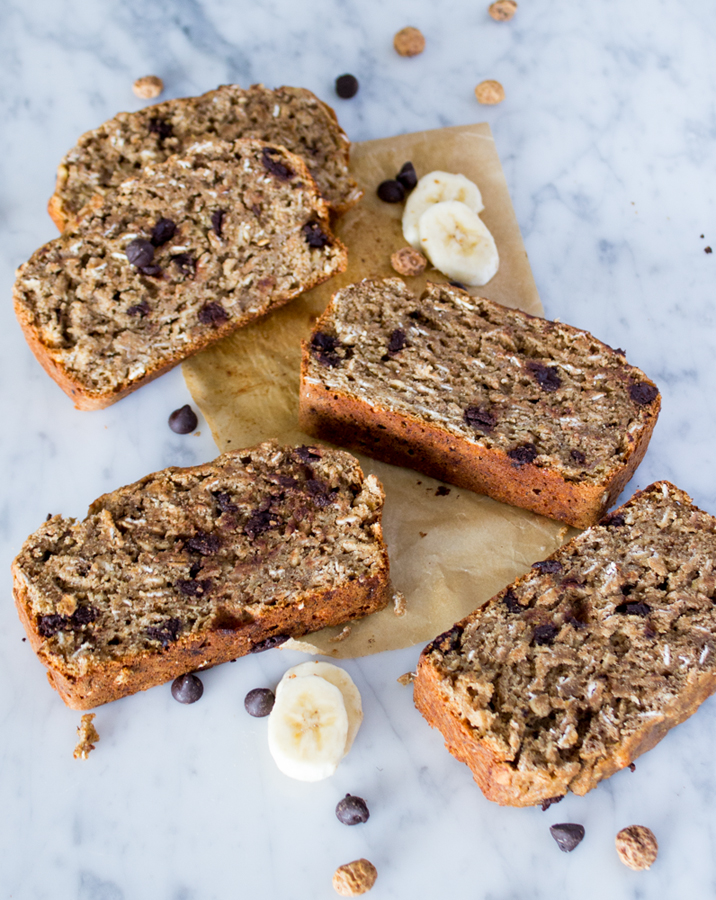 The tigernuts are those little brown balls in the picture.

What the heck are tigernuts?

To my surprise, after googling tigernut horchata I discovered it is a popular drink in Spain that originated in Valencia. There it’s called horchata de chufa. Chufa being the Spanish word for tigernut. My first reaction was, WHAAAAT?!?!?! I spent a semester in Spain in college, and never touched the horchata. I can’t even remember hearing about it. Was I really that consumed with partying and sight-seeing that I overlooked one of Spain’s greatest culinary possessions? I guess so…

Like Mexican horchata, which Americans are more familiar with, horchata de chufa is made by soaking then blending the starchy rice (Mexico) or tigernut (España), and straining the liquid––which is sweetened and chilled before serving. Traditionally they use sugar, but I’m a fan of sweetening it with a date or two. Even banana is a welcome addition. 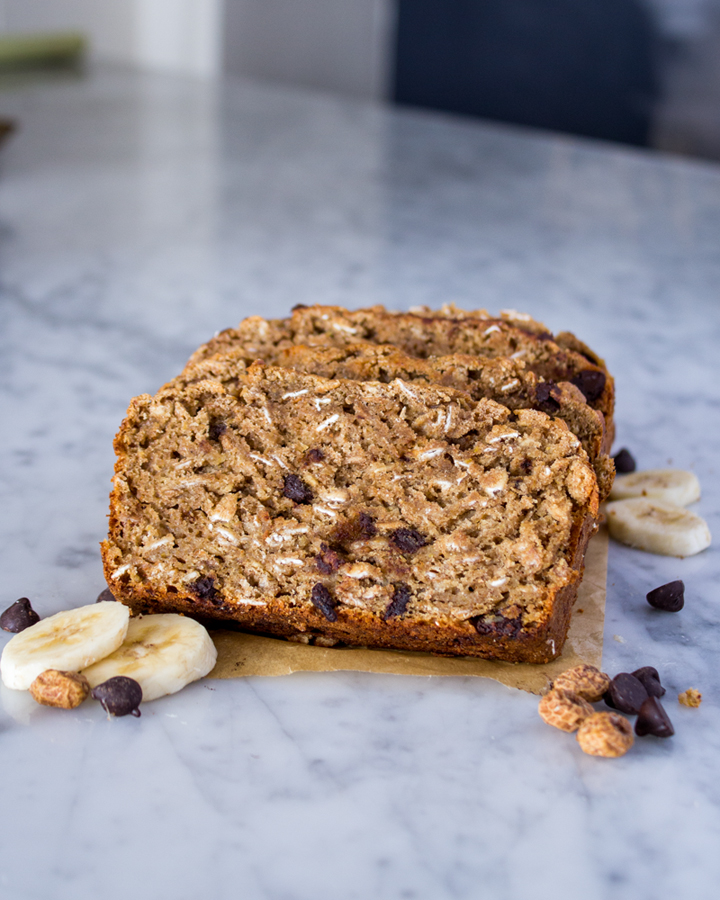 First off, like I said before, tigernuts are not nuts at all. They’re starchy little tubers that are harvested in Spain and Africa, then dried before being used to make horchata. The company Organic Gemini, who is responsible for leading the movement to popularize tigernuts in the U.S., sent me a goodie box of their products. I received a big bag of the “nuts”, tigernut oil, and even flour made from it! I used up the oil for cooking in about a month, but that bag of flour sat in my cabinet until I had the idea to use it in my banana bread.

Another fun fact about tigernuts is that they’re very good for you. They are packed with resistant starch (a prebiotic) that helps support the healthy bacteria in our guts, which equates to good digestion. Or, in my case, the key to happiness. The resistant starch is also different from most starches because it acts as a fabulous source of dietary fiber. Other foods that include resistant starch are beans, and jeruselum artichokes. Yummy!

Tigernut milk––which I’ll share on the blog soon––is  a great alternative to other non-dairy and dairy milks. Actually, of all the non-dairy milks, it is my favorite. If you’re looking for a vegan coffee creamer, tigernut milk is the answer! So rich and delicious, with a natural sweetness similar to almonds. Remember, tigernuts are not nuts at all. They’re allergen free! 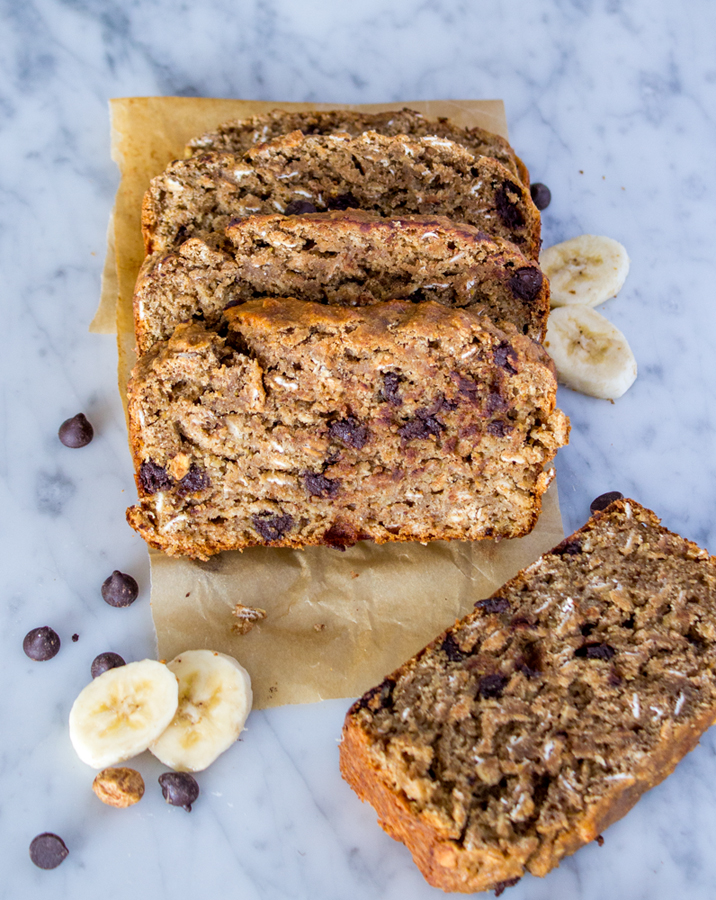 I’m so happy to, 1.) finally be sharing my new favorite banana bread recipe with you, and 2.) finally getting around to using this tigernut flour. Now that I’ve seen it shine in my banana bread I’m planning on using it in pancakes, cookies, muffins, crusts, and whatever else my brain shoots out.

This banana bread is truly delicious. The recipe is adapted from Minimalist Baker’s gluten-free recipe. I swapped out the flours, added chocolate chips and coffee (mocha style), and added some southern girl soul (duh)! I’ll go ahead and warn you now, you may eat the whole loaf in 24 hours. Be sure to enjoy every bite!

Do you have a favorite banana bread recipe? Or have you tried tigernut or tigernut horchata? 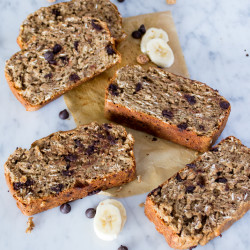 Jenné
I haven't made this loaf gluten-free but I think it would be fine if you swapped out the spelt for a gf flour blend. Let me know if you do! If you don't have spelt on hand you can use whole wheat pastry, or all-purpose flour. Make sure your bananas are nice and ripe 🙂
No ratings yet
Print Recipe Pin Recipe
Prep Time 10 mins
Cook Time 50 mins
Total Time 1 hr
Course Breakfast, Dessert, Snack
Servings 6